Companies House (CH) maintains the register for all limited companies in the UK and plays a significant role in keeping the engine that is the UK economy running. During the pandemic, we’ve had to adapt as an organisation to make sure business keeps going.

One thing we’ve done is strengthen our relationship with the Office for National Statistics (ONS) by collaborating to develop new high-frequency indicators for inclusion in the ONS’ weekly Faster Indicators Bulletin. These indicators use the data by examining the performance of the economy and identifying patterns and trends.

Here, Jack Sim and Tom Hutchinson of Companies House virtually sit down with David Matthewson and Josh Martin from ONS to reflect on how the partnership between the 2 government organisations has worked so far, and how that collaboration is helping to maximise the value of the Companies House register to the UK economy. 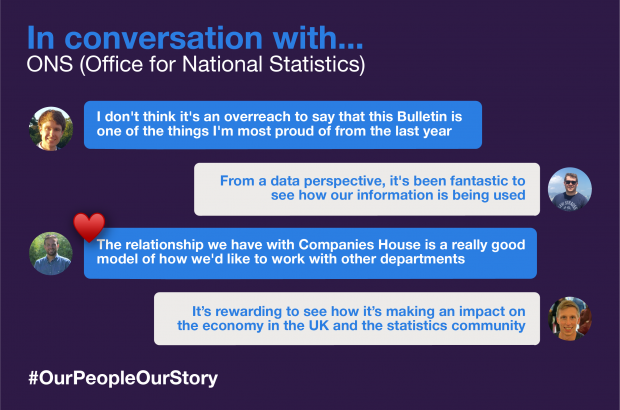 Josh (ONS): When I first started working with Companies House and with Tom, I was the Lead Analyst for the COVID-19 Rapid Response Group at ONS back when we had the first lockdown in March 2020. I approached Companies House to see how we could work together and bring the value of the data to a public audience.

Tom (CH): Yes - at a similar time, we were also approached by HM Treasury (HMT) and the Prime Minister’s Office with a query around what sort of data we could provide to indicate how businesses were coping in the pandemic. So, we created a dataset about voluntary dissolutions and company incorporations, and over time it’s grown from initially sharing it with HMT alone, to a distribution list of around 10 different government departments, including ONS. It was through this that you approached us to look at publishing some of those indicators in the Faster Indicators Bulletin.

Jack (CH): I actually used to work at ONS before I came to Companies House, so I know that we have a long relationship of working very closely together to inform the Inter-Departmental Business Register (IDBR). ONS maintains this register, which is like the Companies House register but is more geared towards the running of business surveys. Companies House data plays an integral role in keeping that up to date, reflecting any changes, and ensuring that businesses are added to and removed from it in a timely manner.

It’s been amazing over the past 12 months or so because our daily dataset has reached tens of departments and we know it's being used in things like dashboards that are going to the Cabinet Office and being used by the Prime Minister’s Office. We also know it's been used by HMT to inform policy decisions during the pandemic and that the Department for Business, Energy and Industrial Strategy (BEIS) has been using it too, so it's providing huge value across government and to the UK economy.

So, what has the data shown so far?

Josh: The data we’ve seen has been quite interesting. I think you would expect in an economic downturn like the one that we're in for it not to be a very good time to open a business and that company incorporations would be lower, but that's not what we've seen in the data and that's supported by other data as well. A lot of other countries are seeing the same thing and we did quite a bit of due diligence early in the process to compare them and what else was out there across the world. We were probably one of the first nations to really make headway on this and publish data quite early in the pandemic.

But of course, necessity is the mother of invention. Businesses are innovating, and people are innovating because they must. Businesses seeking new opportunities might see now as a good time to capitalise on something that was not there before. It’s interesting to see these trends that we would not otherwise be able to see.

Tom: Yeah and it’s just great that we have these ‘Faster Indicator’ reports to refer to when people ask us for data, as we do not have to wait for Official Statistics to be released each quarter.

David (ONS): I also think that the relationship we have with Companies House is a really good model of how we'd like to work with other departments. It’s great to reflect on how well this collaboration is going.

It’s been a difficult year for many reasons, but have there been any notable moments from working throughout the pandemic?

Tom: From a data perspective, it's been fantastic to see how our data is being used. As Jack mentioned earlier, we've seen dashboards and briefing packs using our data in all kinds of things and the Faster Indicators Bulletin is the pinnacle of that because of the time we live in, and how economically important that information is right now.

Josh: I do not think it's an overreach to say that this Bulletin is one of the things I'm most proud of from the last year. It was exciting to drive something forward myself and working with Tom to deliver the Faster Indicators Bulletin. We also published the new quarterly estimates from the IDBR on business birth and deaths at the same time, which have also been popular, and I think being able to deliver on both of those and tell a comprehensive story using both the Companies House data and IDBR data has been great. I think that's really left a bit of a legacy in this area of statistics.

David: I think that the work that Tom, Josh and the rest of the team did to get this up and running is the thing that we should be most proud of and how that relationship is being maintained. It's led to interest from the media and our users in the data, so it's been extremely worthwhile.

Jack: I agree, seeing all of the work going into the report and collecting the data is amazing, and I also think it’s rewarding to see how it’s making an impact on the economy in the UK and the statistics community.